The Perfect Tow Vehicle struggles to take us to a new camp!

Posted on September 27, 2012 by rvsueandcrew

Geese fly overhead as I hitch up to leave Natural Bridge Campground.

Paul and Reine gave me this at my first camp.

Now isn’t that a nice goodbye . . .  I take one last look at the Rogue River and pull out.  Some camps give me a lump in the throat when I leave, and this is one of those.  Just the same, I like going while I still want to stay.

Right as I’m about to leave the campground loop, a picture of the hitch cone pops into my mind’s eye.  “The cone!  I left the cone!” I drive the loop again and retrieve it, while taking another last look at one of the best campsites we’ve camped in so far.

Something doesn’t seem right with the Perfect Tow Vehicle.  It lacks power.  Well, we are going up a long grade.  It’s imperceptible, but it is a long grade.  Maybe that’s why it feels like the PTV has no pep.  It’s probably time for a tune-up, too.  I try to put it out of my mind.  Soon we will be going downhill.  Then it’ll feel right again.

We go downhill and it doesn’t feel right again.

Cattle and horses graze in fields around farmhouses.  Smoke drapes the surrounding mountains and apparently the valley, too, because my eyes are watering.  I hope it isn’t smoky over near Bill and Ann’s.  I look behind me.  The crew sleeps.

Bill and Ann are workamping at Collier Memorial State Park. 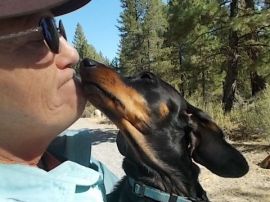 Here’s Ann being kissed by Julie.

We first met this fun pair of Casita owners and their canine crew last January when we camped with a group at Dome Rock (Quartzsite, AZ).  We camped with them again at Fortuna Pond (Yuma, AZ), and at Darby Well (Ajo, AZ).

I invited them over for a visit at Natural Bridge.  It was good to see them again.

Samantha, the beagle half of their canine crew.

I promised that we would visit them at their workamp site, only the crew and I are going to stay at the national forest campground (cheaper!).  It’s only a mile away from the state park campground.

By the time we reach Williamson Campground ($10 a night, $5 with senior pass), we’re in “high desert.”  The air is clear.

I find a perfectly level pull-through with lots of sunshine.

It’s a handy campsite with water right across the campground lane, as well as a vault toilet.  I can take the Best Little Trailer over to the neighboring state park to dump and to put water in the tank.  I can do laundry (coin machines) and take a shower ($2).

This campground has a more subtle beauty, compared with Natural Bridge.

The ponderosa and lodgepole pines are widely spaced.  The warmth of the sun and the dry air feels good after weeks of shade and fog.  And it’s so peaceful!  We have the campground to ourselves except for one motorhome way over on the other side, out of sight and hearing. 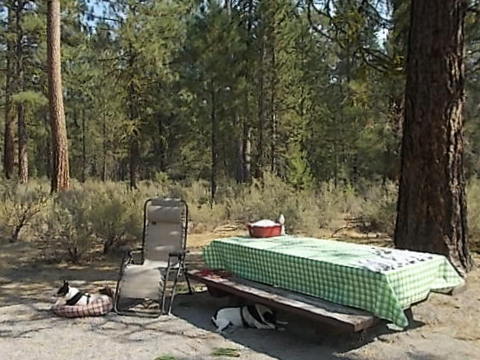 Once we’re settled in, I push Bridget in her stroller. 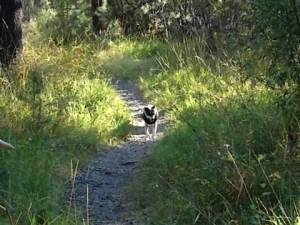 First we drop off our camp fee at the self-pay station.  Then we follow a path down to Williamson River.

Spike tags along.  He has trouble keeping up with us because it’s his job to smell every bush along the way.

The last leg of the trail I carry Bridget where the stroller can’t go.

The Williamson River draws people who like to fish. 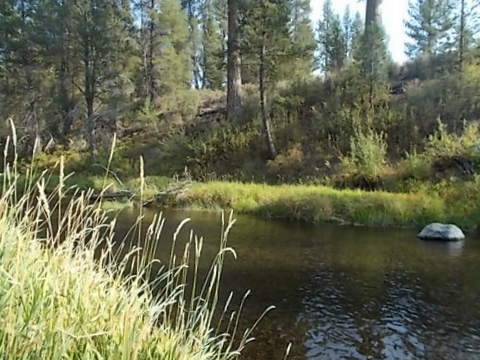 This section of the river is quiet and slow. 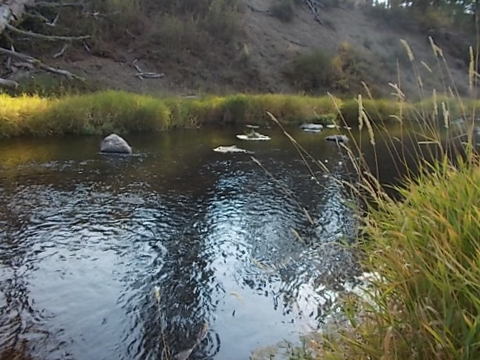 Back at the campsite I look under the hood of the Perfect Tow Vehicle.

What?  Why is the air cleaner out of place?

Could this be the cause of the PTV’s lack of pep?

Or is this the result of a more serious problem?

Canine Corner: “I’m a Dog of Many Names” by Spike

Usually my name is Spike.  Sometimes I can get rvsue to call me Spikey.  That’s the name she uses when I have her right where I want her — under my spell.  Heh-heh.  I’ve got lots of other names, too.

When I sneak off and rvsue can’t find me, she says, “Now where did that Renegade Spike run off to!”  I love that one!

Another favorite is “You are such a Devil Dog!”   Oh yeah, and when she doesn’t do what I want, forcing me to turn on the nonstop bark, I get this classic:  “You are the Biggest Pain In The A#%!”

My most recent name came as a result of an incident with spilled coffee.  In the minute that rvsue stepped outside I hopped on the bed and began investigating the tempting items on the sink cover.  I thought I had more time for this activity, but rvsue suddenly appeared which gave me cause to jerk my head.  Coffee flew all over the floor and onto the bed!

“For heaven’s sake, Spike, do you think we could have one day without you acting like a criminal?”

34 Responses to The Perfect Tow Vehicle struggles to take us to a new camp!