Posted on September 29, 2012 by rvsueandcrew

Ann, Bill, Sammy, Julie, Bridget, Spike and I are off to the Williamson River!

The canines jump out to look over the riverbank where we’ll put in.

Bill and Ann take down their sleek Hurricane pvc kayaks from the roof rack. 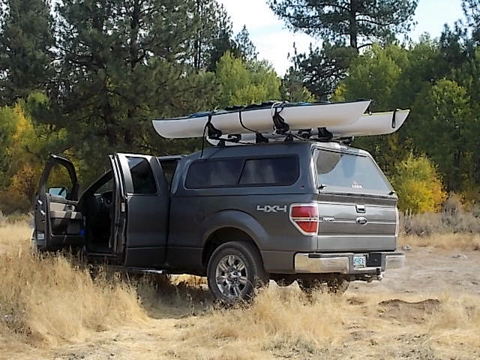 I unpack the Blue Blob and commence to blow it up with my Coleman air pump.

The seats aren’t in yet.

Bill, being the gentleman that he is, takes over the job.

We place an uncertain Bridget and a more-uncertain Spike in the Blue Blob.

Once I’m in, Ann shoves us off the bank.  About ten feet from shore, Spike changes his mind, deciding he’d rather stay on land.

“Spike, no!” I yell, as he tries to back out of his harness.  I let up the pressure on the leash so he can’t back out of it.  Only that enables him to jump over the side!  The water is so clear I can see him under water with his eyes closed.  An unforgettable sight!

He bobs up to the surface and paddles like crazy toward shore.  The river water is extremely cold so he’s very motivated!  Ann calls, “C’mon Spike!  C’mon!  You can do it!” until he scrambles up the bank.

I bring the Blue Blob back to land and this time Spike stays put.

He shivers until the sun dries him out.  Ann says that Samantha the beagle had to learn this hard, cold lesson the first time they took her kayaking.  She doesn’t jump out any more.  Neither, I suspect, will Spike! 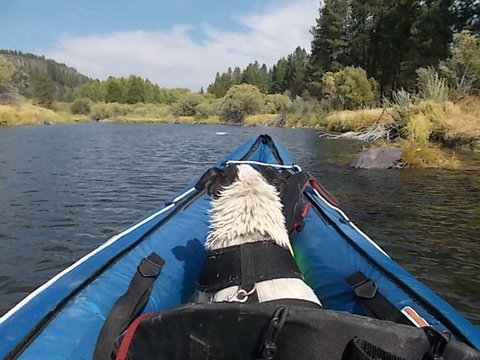 This little boy is staying in his seat!

Everyone’s in and off we go! 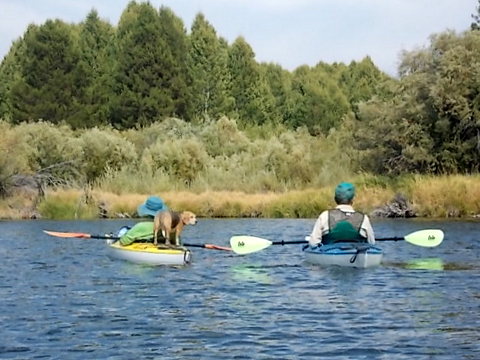 Ann and Bill are experienced kayakers. 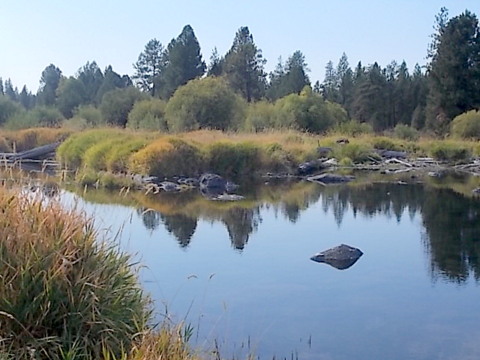 Subtle autumn colors of yellow, gold, and brown against the evergreens.

Bridget sits on my lap.  With both of us in the back and only Spike in the front, the Blue Blob is tipped up in the front, making it slower than the sleek kayaks.  It couldn’t possibly be my paddling!

A rocky cliff watches us float by. Well, not really…

We paddle all the way to where the river emerges out of rocks.

Water springs from the rocks.

All of us get out — ooh that water is cold!

We take a break on some rocks.  Spike rolls in the grass.  After a moment of scampering around, happy to be on firm ground again, all the canines board their vessels.  The float has them so relaxed they begin to doze.

Julie’s ready for the return float. 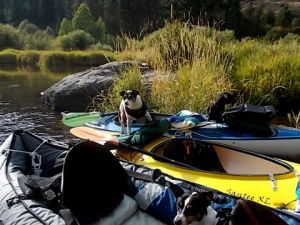 Don’t leave without me!

Bill, Ann and I take in the peaceful scene.

The quiet of late afternoon on the Williamson River

We see the work of beavers along the riverbank.  The river is too wide here for dams, so they fashion their dens by burrowing into the bank and creating a facade of branches stripped of bark.  Fish begin to jump at this time of day. 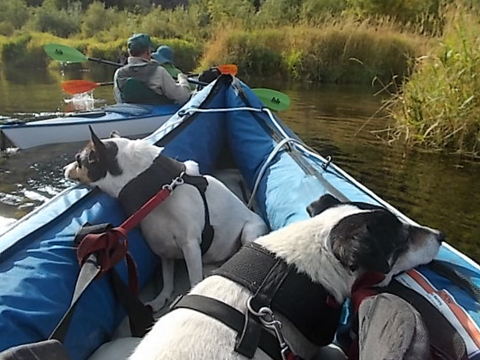 Looks like Bridget and Spike had a good day!

Thank you, Bill and Ann, for showing us this beautiful river.

It was a day I’ll never forget.

P.S.  I posted a lot of photos today.  I have more that are better than these because they were taken by Bill.  I’ll make up a slideshow of those photos, once I decide which ones don’t make my butt look fat.

36 Responses to Floating the Williamson River!