A fickle boy and “the bum’s rush”

Thanksgiving with Chuck and Geri was fun, of course.

I am not shy about eating.  If someone puts good food in front of me, I’m not going to pick around and pretend to be dainty.  I’m going to EAT!  It’s been a very long time since I’ve had a real Thanksgiving with turkey and all the trimmings.  I’m thankful I could spend it with these good friends.

Geri treats their three dogs and my two by setting out individual plates of turkey with some gravy.

Oh, how the crew enjoys that!

Later I catch Spike lying on the couch, snuggled up to Geri, with his chin resting on her arm.  He ignores me.

I devote every single day, year in and year out, to making sure his every wish is fulfilled.

Gee, Spike, that’s the thanks I get?

Last night’s rain and the cold wind means no long walk for Bridget and Spike.  “The Canine Law of Walks” kicks in:  As the length of walks shorten, the number of walks must increase.  We’re in-and-out the door all day. 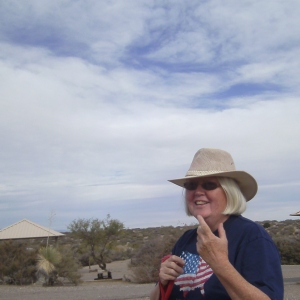 “Hmmm, I think I’ll build a pigpen out back of the Casita.”

George, the camp host here at Elephant Butte State Park, knocks on my door this morning.  He’s a nice guy, but he has a job to do.

He informs me we have run past the 21-day limit allowed at New Mexico State Parks.

George says kindly, “You can stay through the weekend.”

The 21-day limit may seem silly in a campground that’s mostly empty.

However, I understand the fear that campers will start raising chickens or hoist a transmission up a tree, or something.

We won’t go far, probably to Caballo Lake or Percha Dam State Parks, as both are less than 20 miles from here.  That way I can drive the PTV back to Elephant Butte for Chip to install the solar panel whenever he gives the word.

21 Responses to A fickle boy and “the bum’s rush”