Simply amazing! – the story of Julio, Janie, and Jumbo Kitty

As Mother used to say, “It’ll all work out in the end.”

Can you think of a time when you tried to make a change in your life and no matter what you did to make it happen, you kept running into obstacles?  You pushed and pushed against the roadblocks as they popped up out of nowhere and all you seemed to accomplish was a spinning of your wheels?

Then at another time, when you tried to make a change, everything fell into place so perfectly that it amazed you? That’s the way it’s been for me the past six years since I decided to simplify my life to live fulltime in an rv.  Here’s an example….

While planning my eventual getaway, I realized Janie and Jumbo Kitty couldn’t be included in the fulltiming scheme. What could I do? Dump them into a shelter and take off?  Unthinkable!  I would have had to scrap my plans to fulltime if not for a simply amazing solution coming to pass! 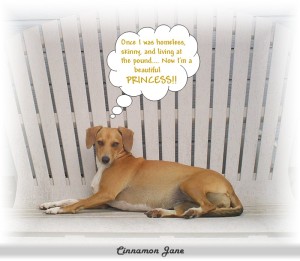 Let me tell you a little story ….

I had a yard sale some years back.  (Not something I would ever do again, by the way.  It’s more trouble than it’s worth.)  One of the shoppers at my yard sale was Felix, who lives down the road from my house.  Felix noticed I was having trouble keeping my big yard mowed.  This was true, because the mower was often in the shop for repairs.   So I turned the job over to him.

Soon we got in the habit of sitting in the shade of a tree talking, while he drank his Gatorade or iced tea.  These talks covered a lot of ground, including his painful divorce that resulted in his wife moving out of the house, leaving their son, Julio, in the custody of Felix.  Felix worried about being a good father for Julio, who was a very active kindergartener at the time and whose speech seemed delayed.

Now what does this have to do with Janie and Jumbo Kitty?

Well, take one rambunctious little boy and a dog who loves to play, play, play, and you know what’s going to happen!

They hit it off immediately.  (Bridget and Spike?  Not so much.)  When Felix pulls his lawn equipment trailer into my driveway, Julio bounds out of the truck yelling, “Janie! Janie!” and Janie comes running around the house to jump into his arms.  They laugh and roll around in the grass, run, kiss, hug, and run some more!  A few years have passed.  Boy and dog absolutely adore each other, and the speech delay is gone. 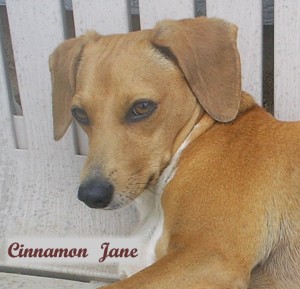 Okay, what about Janie and Jumbo Kitty when the canine crew and I leave?

Felix plans to buy my house!  Not only that (which is amazing in itself in this  economy), he has agreed to adopt Janie and Jumbo Kitty!  Janie and JK have a new job:  to serve as special companions to an eight-year-old boy who doesn’t have a mother in his house to tuck him in at night.  Can you see it? Julio will lie asleep in his bed with Janie’s head on his chest and JK curled up next to him in the covers.

Isn’t that a beautiful solution? 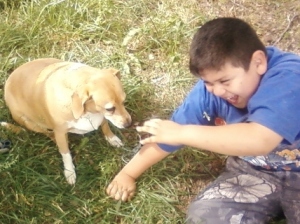 As anyone who has ever loved an animal can imagine, the day I leave and head on down the road, never to return, will be a time of excitement, anticipation, and sadness.  That goodbye is several weeks away and I’m trying not to think about it too much.

Yes, it’s amazing how things are falling into place…

Click on the photos to get a better look.

Fulltime nomad
View all posts by rvsueandcrew →
This entry was posted in Getting Ready To Go and tagged cat, dog, fulltiming. Bookmark the permalink.

9 Responses to Simply amazing! – the story of Julio, Janie, and Jumbo Kitty