Friend Chuck and I climb into his Ford F450-V10 truck and pull out of Sand Island Campground, Bluff, Utah.

We’re on our way to the Mesa Verde ruins in Colorado, an 86-mile-drive to the east.

Geri is babysitting Spike, Bridget, Radar and Doogie Bowser in the fifth-wheel.  Geri has explored Mesa Verde more than once whereas it’s new for Chuck and me.  Even so, I appreciate her thoughtful offer to take the crew off my hands so I can enjoy this day trip.

For me it’s a treat just to have someone else do the driving.

Soon after entering the national park, the road winds upward.  I didn’t realize Mesa Verde was so high up!

Chuck’s truck carries us easily to look-out points where we can view Montezuma Valley.

“Look over there.  That’s snow falling on the mountains,” Chuck points out. (zoomed photo below)

After that stop, the sun warms us as we tour the park, and a jacket isn’t needed.

We decided not to take the guided tours.  Maybe if we were camped in the park, we would have.  It’s a bit much when driving from Bluff and back.

The ruins are clearly visible from above. 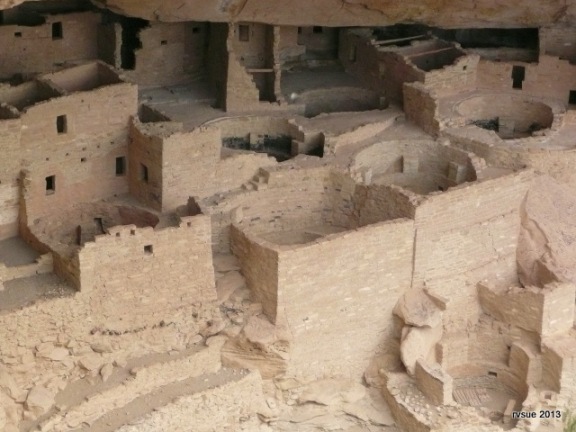 I like to have a few people in a photo to give a sense of size.

The indoor displays at the park are very well done.

I particularly enjoy examining the dioramas of Puebloan villages at successive periods in time.  At the museum Chuck and I stroll through the exhibits of pottery, baskets, blankets, bead work, jewelry, fossils, rocks, and more.

We stop at the park restaurant.  A few people dine next to the big windows.  Since Geri served us a big breakfast of eggs, bacon, and hash browns before we left, Chuck and I aren’t very hungry for lunch.  We buy a snack and a water, cruise the gift shop, and continue our tour.

On the way out of the park, oncoming cars have headlights on.

Patches of the road are wet.  The rain apparently danced around us all day, never shedding a drop on our heads!

“Oh, I forgot to get a patch!” Chuck explains that he and Geri are building a collection of patches from all the national parks they’ve visited.

“Stop at the Visitors’ Center by the gate,” I suggest.  “They’ll have them.”

From Mesa Verde, Chuck drives us to Four Corners.

It’s only about four miles off the route back to Bluff.  Of course, Four Corners is where you can see Arizona, Utah, Colorado, and New Mexico from one spot.  Kind of a non-event, but, hey, he’s driving and I’m loving the chauffeured ride!

Chuck says, “Fee area.  Roll down your window, take a picture of the sign, and we’re outta here!”

He turns the truck on a dime (well, not really, but it felt like it!) and roars back down the highway with me doubled-over in gales of laughter.

But that’s not all!

Bridget, Spike, Doogie Bowser, and Radar squirm and hop with joy when Chuck and I come in the door of the fifth-wheel.

“Bridget cried for about a half-hour after you left,” Geri reports.  “But once she saw Spike relaxed, she calmed down and was fine.”

We leave the dogs, and head out to Bluff City Cafe. 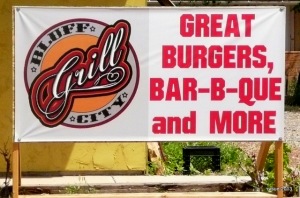 The cafe is under new ownership and we’ve heard from a local that the food is excellent.

We opt for sandwiches.  Chuck has pulled pork, Geri has beef brisket, and I have grilled chicken.  We all agree the barbeque sauce takes a sandwich to a whole new level!

Back at Sand Island Campground . . .

A last stroll around the campground and the crew and I head back to our campsite.

Note:  You can read Geri’s blog at Happy Trails.