We enter Goosenecks State Park and I quickly park and jump out to peer over the stone waist-high wall.  Tiny rafts with even tinier people float on the San Juan River some 1,000 feet below as the river meanders through layered cliffs.

Bridget and Spike are pitching a fit in the Perfect Tow Vehicle.

I size up the situation.  Four motorhomes occupy the broad, flat area next to the viewing area.  Not for us.  My eye follows the dirt lane as it traces the rim.  A fifth wheel and a van camper are further out on the spit of land that’s bordered by a meander.  The fifth wheel is parked so close to the edge of the cliff it looks like any vibration, such as flushing the toilet, would send it over the side.  Good heavens.

Goosenecks State Park brochure, circa 2080 A.D.:  “The unique rock formations of Goosenecks were brought about by millions of years of geologic forces such as uplifts and shifts, as well as erosion caused by glaciers, wind, rain, river current, and frost, including the abrasions caused by motorhomes and fifth-wheels falling down the cliffs.”

We proceed down the lane and pass the Class A motorhomes.

Two men stand together laughing, one with a remote in his hand.  I look ahead and here comes a little red sportscar right toward us.  It’s hopping over rocks and kicking up dust.  Suddenly it spins and jerks out of our path.  Men and their toys . . .

I continue on until I find a spot I like.

Not more than a place to pull off the road, but there’s not going to be traffic out here.  I like it because it’s not on the rim side of the road. (The photo above makes us look closer to the edge than we really are.) I don’t like to step out of my home to the edge of a 1,000 foot drop.

It also places the refrigerator facing northeast rather than southwest as the rim-huggers are situated. The door of the BLT opens to the opposite view which is a carpet of blue-green sagebrush and rabbitgrass leading to a horizon of “painted” hills with a zigzag pattern. Very nice.

The rest of the day I set up camp, walk with the crew, and relax.

More RVs arrive throughout the afternoon.  That evening while falling asleep, I hear voices.  I lift up the blind.  A couple in a Class C are maneuvering their home into position across the lane from us and next to the rim . . . in the dark.  Typical division of labor.  He’s driving while she’s standing outside shouting directions.  Well, it is the beginning of the weekend, after all.

First thing, right after breakfast, I move our camp further out on the rim.  I like kids but not next door.  This new camp is better anyway. 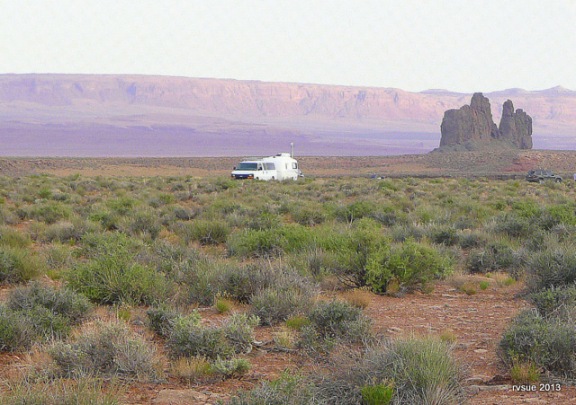 I like it enough to immediately unhitch.  The day drifts by with me alternating between blogging, responding to comments, eating, walking the crew, cooking, reading, and relaxing while enjoying the breeze and the view.  I’m really not that interested in looking over the edge of the rim, especially when there’s nothing between me and the bottom but air.

A few people walk or bike the lane.  A woman on a ATV roars by.  Mostly it’s a quiet day.

This day looks unpredictable.  Too much haze, heavy cloud cover, and just enough gusty wind to keep me from taking photographs.  Maybe tomorrow will be better for touring the Valley of the Gods.