Someone explain to me why I have rat terriers?

The Perfect Tow Vehicle has squatters!

I don’t think this is the use Mick intended when he designed the panel’s tilt mechanism.

In a streak of laziness I neglect to put the trash inside a sealed container in the PTV.  Aw, what the heck.  I’ll just throw this bag of trash in the back and be done with it.

Yesterday afternoon I open up the back of the PTV to get another can of coffee.

The evidence is clear.  Holes gnawed into the trash bag.  Mice droppings all around.

Rusty happens to walk over at this point.

“Rusty.  I’ve got mice.  Could you find a place up high to hang this bag of trash?”

So, dear readers, learn from my mistake and keep your trash sealed up in a bin or hang it up high.

The time has come to move to our next camp. 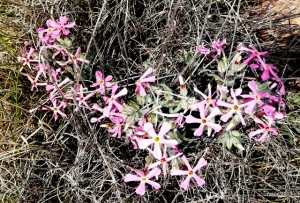 When planning to leave Camp Drake, three conditions have to occur.

One, Rusty and Timber have to be in a good, solid position for securing their new home.

Two, the weather has to be acceptable north of here.  In other words, not too cold, a possibility because the area around Flagstaff is much higher elevation.

Three, the forecast for weather in Monument Valley has to be good a week or so from now.  By good, I mean no crazy wind or dust storms poised to maraud the flat, sandy desert.

Tomorrow the weather is unsettled to the north.

Possible rain and wind.  Hey, I’m retired.  I don’t have to drive in that.  Friday looks much better.  So Friday it is.  I have tasks to take care of before leaving anyway.

I try to avoid rain, but you never know.  Guess I shouldn’t drive around with windshield wipers falling off due to sun rot.  Which I’ve been doing for months now.  I call up AutoZone in Chino Valley.  They have the right blades.

I load up the PTV with tons of laundry.

The insidious, powdery dust crawls into everything and sticks.  I feel like I’m living in a dust bin.  My clothes and the quilts are brown.

I pull the trash bag down and throw it in the back.  Again, I’m too lazy to rearrange everything so I can get my hands on a container to put it in.  Well, resident rodents, it’s your lucky day.  You get to chow down while we drive to Chino Valley.  I’ll just put these two RAT terriers inside with you.  Don’t worry.  You’ll be fine.  They won’t bother you. Just don’t run under my feet while I’m driving.

First stop is the laundromat.

Nothing to report there.  Next is the water vending machine where I fill up ten gallons.

A quick stop at Safeway for a few groceries.  I pause in aisle 5 and stare at rat traps until I lose my nerve.

Out in the parking lot, I throw away some trash, but the big bag of trash is too big.

Clever, these stores.  Make the aperture tiny to foil cheap people who don’t want to pay for trash removal.  It’s just as well.   There’s probably a family of six living in that bag by now.

Next I drive over to AutoZone.

The Zone Guy helps me decide which blades to buy.  Gee, so many choices for 22-inch wiper blades?  They’re all the same size and color.  What’s the dif?   Playing it safe, I pick blades in the mid-range, price-wise — Bosch somethingoruther — and he slaps those babies on for me.  One last stop to top off the gas tank ($3.55 a gallon) and soon we’re bumping down the dirt-gravel road toward Camp Drake.  The BLT’s antenna peeks above the junipers, welcoming us home.

Now to answer a few questions that appeared in the comments following yesterday’s post about Rusty and Timber.

Rusty will be able to keep his truck at his new home.

Will Rusty have a PayPal account for money gifts?

I asked Rusty about PayPal and he says, no, he doesn’t want to have a PayPal account.  He also doesn’t want checks.  He’s concerned they will affect his pension.  I suggest gift cards or cash that’s concealed in a card or thick paper.

What is the address where we can send money and gift cards to Rusty?

There isn’t an address yet.  Rusty will, of course, have a street address once he knows where he will live.  He hasn’t rented a post office or UPS box yet because he isn’t sure what facility will be closest to his house.  As soon as an address is available, you’ll see it here.

A wish list will be posted.  I hesitate to post one now as I don’t want to start keeping track of who’s bought what this far in advance.  Prior to a wish list, I’ll need to compile a list of items that are promised from the homes of readers who live in the area.  I’ll address that soon.

How do I keep the crew so white?

Bridget and Spike are self-cleaning.  In other words, I do nothing.  All by themselves, they collect dirt which they deposit inside the BLT using several methods, such as rubbing on the walls, shaking vigorously in the aisle, and rolling around on the bed.

Canine Corner: A Pictorial Essay — “What Dust Bunnies Think” by Bridget and Spike

Ooh, that sun feels so good! 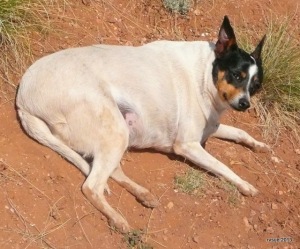 I feel like going inside to shake my hiney.

Why snooze on a mat when you can lie in the DIRT? 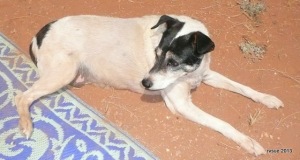 Ah yes, a drink is just what I need before I roll around on the bed.

42 Responses to Someone explain to me why I have rat terriers?