Veggies and a lot of bull

Chores are more fun outside.

This morning I take a colander of radishes and green beans out to my camp chair.  It’s a sunshiny, breezy morning here at Juniper Hill Camp in central Arizona, east of Prescott.

Why stay inside?  From my camp chair I can look across the valley toward the town of Dewey and Crater Mountain.  I can watch the traffic getting on and off the freeway.

Bridget and Spike roam around enjoying the morning, too.

I strip the radishes of their tops and roots and store them in the fridge.  I snap the beans.

I go back inside for the new red potatoes.  I partially peel them.

Later I boil the potatoes with the green beans and right before they’re done, I use a pair of scissors to cut the parsley into the pot.

I cut the entire bunch of parsley into the pot!

When the parsley is soft and wilted, I spoon out enough for lunch.  A sprinkle of lemon pepper seasoning or garlic salt, and a smidgen of light margarine and it’s ready to eat.  It’s a rustic dish.  Peasant food.

I told you I eat plain! 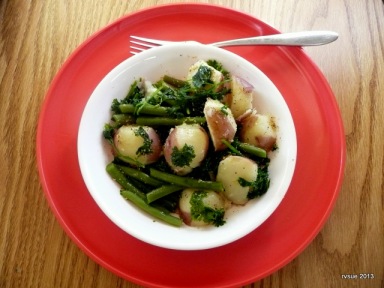 I don’t know why I’m showing you this.  I don’t want you to make this dish at home.

You will hate it.

You have to REALLY like parsley, which most people don’t.  I don’t know why, I get parsley cravings and this dish takes care of that.  Leftovers make a quick side dish.

This dang bull is scary.

He makes deep, rumbling noises along with loud screams.  He paws the earth like bulls do when they’re about to gore a matador.  His cojones are bigger than Spikey’s head!  I can easily imagine all that beef-on-the-hoof running headlong into the side of the Best Little Trailer.  Rusty pounds on the wall of his camper with a hammer when the bull comes near his campsite which is somewhat effective.

Spike successfully runs him off, but the bull comes back every day.  Bridget and I go inside the BLT and let Spike handle the situation.

Rusty and Timber come over for a brief visit.

Rusty has Timber obey some commands.  The wind has become strong enough that sitting outside isn’t appealing, so they don’t stay long.

I get one television channel here.

Most of the programming is unbearable.  I do watch “The Big Bang Theory” at six on weeknights.  I’m trying to decide whether to move camp or to drive over to the Camp Verde area tomorrow for a look-see.  I don’t want to camp in a crowded, touristy area.  Like I need to tell you that . . .

73 Responses to Veggies and a lot of bull