Packing up, breaking camp, moving on to our next boondock!

In the last exciting episode of rvsue and her canine crew . .

Bridget, Spike and I are boondocked in the desert next to Saddle Mountain not far from the little town of Tonopah, Arizona. 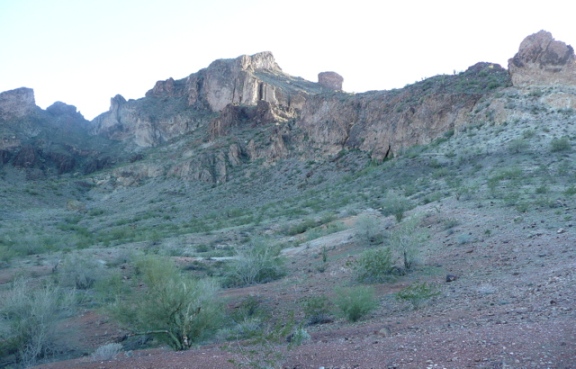 Late in the afternoon I drive over to Bob’s campsite (cheaprvliving.com).  Bob has a Chevy Express van, too.

I ask him if he’d like to ride over to another part of the BLM land to take a walk with our dogs.  “Sure!” he replies.

No question that Bob’s dog, Homer, is game for a ride in the PTV.

Without hesitating, he jumps onto the passenger seat.  He finds a place to sit between the seats and waits expectantly, facing the windshield.  Bridget wiggles nervously behind him and Spike claims the bench seat.  Bob climbs in the passenger seat and off we go.  I drive very slowly down our lane.  I’m careful to avoid the big, bad, sharp rocks.

As we walk toward the cliffs (first photo), I tell Bob I’m going to leave in the morning for a new camp.  I have several reasons:  freshen up the groceries, take on water, dump, go to my bank, order stuff and have it delivered to a UPS store, get a haircut, do laundry, take the PTV to a brake shop, and probably more stuff I’m not remembering as I write this.

I can do all these things in Wickenburg which is only an hour’s drive north of here.

Not that I can’t do them elsewhere, but Wickenburg is very handy.  For instance, my bank, Safeway grocery, and the laundromat are all at the same intersection.

As I drop Bob and Homer off at their campsite after our walk, Bob asks, “Will I see you again before you leave in the morning?  I mean, what time are you going?”

It’s going to be a hot day in the nineties.  It would make sense to get up and get going while the morning is cool.  I usually do just that on a travel day.  However, today I wake up feeling lazy.  I dawdle at the computer sipping my coffee, take a sponge bath, and putz around until I notice it’s already 9 o’clock.

Bob comes along with Homer.

“You’re still here!” Bob announces as he walks up.

I explain my slow start, and, of course, we can’t help but gab, gab, and gab some more about blogging.  At one point I’m tempted to stay another day.  No, I should push on.  I’m on the verge of slipping into a writing rut.  A new camp is what I need.  Bob and I exchange emails, say goodbye, and he continues up the lane with Homer.

The sun is bright and the day becomes very warm. 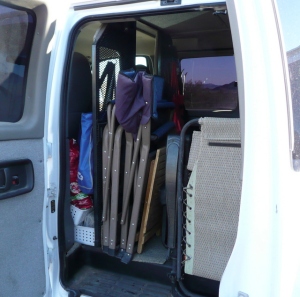 My ambition kicks in.  My two blue chairs and the side table fit in the space in front of the bench seat on the driver’s side of the PTV.  The lounger slides in next to the door.

Having passenger doors on both sides of the PTV makes loading and unloading stuff easy.

The PTV has eight doors in all! 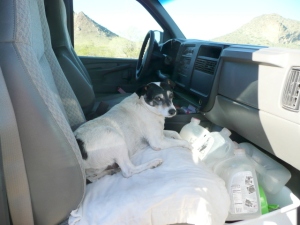 I pull up the stakes from the corners of the outdoor rug.  I start to fold the rug and all is going well until Spike comes along and lies down on it.  He refuses to get off it.

I pick him up and put him in the front seat of the PTV.  He does not look happy.

“Spikey, you always love going to a new camp.  What?  Are you going to miss Homer?”

As soon as the quilt is placed on the bench seat, Bridget gets in. 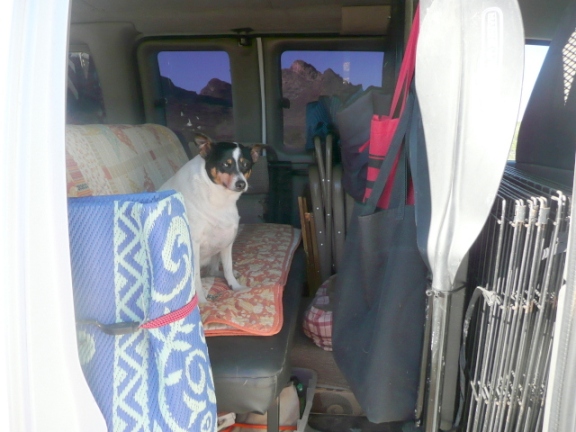 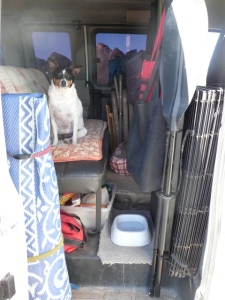 I finish folding the rug and secure it with two bungee cords.  It slides in by the door next to the bench seat on the passenger side of the BLT.

The dog pen is behind the passenger seat, my kayak paddles are secured behind the pen, and tote bags hang from the wire grates.

A small rug keeps the water dish from moving around in transit.  Sometimes Bridget and Spike like a drink while riding along.

Being lazy, I didn’t wash the dishes or clean out the coffee pot this morning. 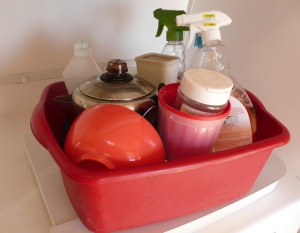 It doesn’t matter.  I put the dirty dishes, the pot, and other loose kitchen stuff in a dishpan and place it all on the floor.

If I stopped to clean dishes and organize, I’d never get going!

I secure the interior, placing things on the floor rather than letting them fall.  I take down the antenna and store it inside the BLT.

I always take this precaution before towing. 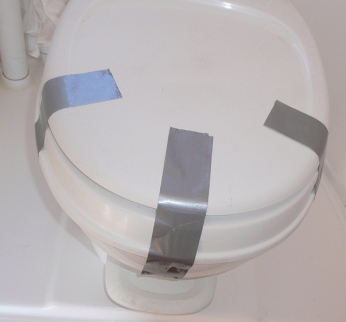 Yet another use for duct tape!

Spike isn’t in the PTV.  Oh, boy, where did that renegade run off to?

I look around until I find him under the BLT.  He refuses to come out.

I crawl under, pull him out, and place him inside the PTV next to Bridge.

Before long we’re hitched up and on the road to our new camp!

Here’s what I see when I look back at the crew from the driver’s seat.  What a pair of sad sacks today!  Hmm . . . Maybe they need more sleep. 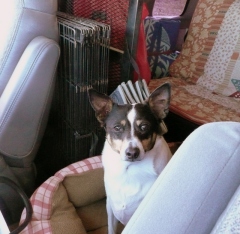 Where are we going?

Do you remember where we were when horses grazed around our campsite?

That’s right!  We’re on our way back to Congress for more BLM boondocking!

NOTE:  Bridget and Spike sleep all the way.  Well-rested with a new camp to explore, the crew is happy again.  More about our new camp in the next post!

53 Responses to Packing up, breaking camp, moving on to our next boondock!