Spike pulls another fast one on me

Posted on December 2, 2012 by rvsueandcrew

The three of us lounge around the campsite enjoying the desert.

Peace reigns at the campsite.

Bridget, of course, is close by.  She relaxes in the doggie bed with her face tucked in to block out the desert sunshine.  She’s thinking her own lazy thoughts, no doubt.

Spike, as is his custom, lies in the dirt under the BLT where I can’t see him.  No telling what he’s thinking.

Periodically, I glance under there to check on him.

Darn that dog!  I scan the desert and see the four-legged devil trotting down the lane toward the highway. 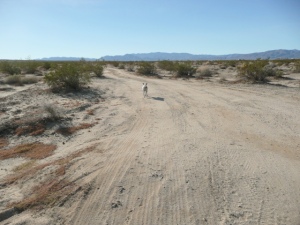 I’m glad we’re camped far from the road.  It’ll take him quite a while to get that far.

I scramble for my sandals and hustle after him with Bridget trailing behind me.

No sense calling him as he can’t hear me and wouldn’t respond if he could. He’s picking up speed.  Eventually the lane curves around the bushes which gives him the cover he needs for his plan.

I have slip-on sandals on, not the lace-up walking shoes I usually wear when traipsing the desert. 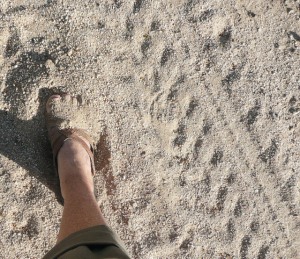 The heavy, coarse sand gets into the sandals, making a fast chase difficult.

I don’t want Bridget to run too fast and hurt her leg again.  Yet my mind foresees a terrible outcome and at the same time I get madder and madder at Spike’s repeated recklessness.

A big ol’ hauling truck rumbles down the highway.  Well, at least he knows to stay away from traffic.

Slowly I turn 360 degrees, eyes scanning like radar.  No sign of him! He could be behind any one of the million creosote bushes around here, not knowing which way to go, what with his poor eyesight.

Panic grabs me by the throat.

Stupid me!  I should have looked for his tracks.  Now when we backtrack on this lane, I’ll see Bridget’s tracks and my own.  I stop to think:  WWSD?  What WOULD he do?  I put my devil cap on, so to speak.

He’d make me think he’s going down the lane.  Then as soon as he figured he’s out of our view, he’d make a sharp right.  Why?  To go over to that group of RVs and socialize with the folks.  That’s it!

Bridget sits in the sand.

The two of us trudge through the creosote bushes and other thorny desert plants.  As we approach the RVs, a group of people sitting in a circle comes into view.  My hope increases.

“Hello!  I’m sorry to interrupt.  I’m Sue from the Casita over there.  I have another dog that looks like this one.  Have you seen him?”

Someone replies, “He was here about five minutes ago.”  I can see from the smiles that Spike made himself well-acquainted with everyone.

Another voice, “Has a short tail.”

Still another, “He went that-a-way.”  She points in the direction of our campsite.  It’s a little dot of white against the mountain backdrop.

As I turn to head that way, I have a sudden urge to make a remark to the people, like “I’m really 27 years old.  I look this way because of THAT DOG!”  No time for jokes.  We need to get going.

Oh no, not now.  Bridget is playing the group for attention.  “C’mon, Bridget.  Let’s GO!”  She ignores me.  I go over, pick her up, and carry her away from the RVers who call out cheerily, “Good luck!”

We make a beeline to the BLT. 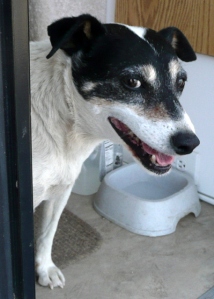 All the way back, two scenarios alternately play in my mind:

1)  I frantically search around the campsite in tears, looking under the BLT, screaming his name, or. . .

2)  Spike greet us with a devilish expression of “Where have you two been?”

Thank God, it turns out to be the latter.

Note:  To see a brief summary of where we camped and what we spent during November, click on the drop-down menu under Financial Reports in the header.

48 Responses to Spike pulls another fast one on me