Wildlife in the desert

Bridget, Spike, and I sit in our campsite at dusk.  As is typical for this time of day, once the sun slides behind the ridge, a cool, refreshing breeze blows up from the deep wash that borders Owl Canyon Campground.  The campground is almost empty, so the crew is off-leash, relaxing beside me.

I hung up the patio mat for a sun screen.

Suddenly Spike lifts his head to focus intently on something on the other side of the BLT.

The fur stands up on the ridge of his back.  Uh oh.  Not good.  By the time I jump up to see what’s caught Spike’s interest, he darts under the BLT and out the other side.  I run around the back end of the BLT and see what looks like a coyote standing on the other side of the playground.  He’s looking directly at Spike.  Spike starts after it and I start after Spike.  Oh boy.  Here we go again . . . .

It’s almost dark, but the moon is full and bright.

I scoop up Spike.  I hold him in my arms and watch the coyote climb up the side of the rock formation, which is almost a perfectly vertical climb.  Hmm . . .  It’s not climbing like a coyote.  It’s catlike.  But it can’t be a mountain lion with that bushy tail.

Whatever it is, it disappears over the top of the ridge.

I toss the crew into the BLT and immediately trot down to warn the people at the camper a few campsites from us.  The couple is outside.  “Hi! ” I call out as I hurry toward them.  “Do you have any pets?”

The man says that they don’t and I proceed to tell the couple what I just saw.  The man says, “Gee, I would’ve like to have seen that.”  As I’m pointing to where I last saw the animal on the ridge, it reappears, runs along the ridge, and then stops to sit a moment, silhouetted by the glow of the full moon which, from our viewpoint, is positioned above its shoulder.

We three campers stare transfixed at our glimpse of desert wildness.

“Wouldn’t that make a picture,” the man remarks. ” . . . if we had one of those high-powered cameras.”  The animal continues on, down one rock slope and up and over another to descend into the other part of the campground, out of our sight.

The scenery is eye-catching, no matter what the angle.

The crew and I board the PTV to drive the loop through Rainbow Basin.  It’s early.  I’ve got my coffee with me.  Of course, I take several photos.  At one point, I park the PTV, grab the camera and walking stick, and let out the crew.

This isn’t the ridge we climbed. Sometimes I’m too much in the moment to take a photo.

“Okay, listen up, you desert rats.  We’re going to climb up to that ridge.”

I tromp off the road and head up the embankment.  I glance back at my crew.  Spike stands in the road looking at me like I’m nuts.  Bridget is plopped down by the PTV, equally perplexed.

“C’mon up here!  You can do it!”  By the time we reach the top, Bridget and Spike are panting, but exuding confidence.  The three of us gaze across the expanse of desert.

Later that morning I learn more about the couple I met last night.

They’re Joan and Francois from Vancouver Island.  They’ve explored Central and South America.  I listen with interest as they share some of their amazing experiences in Peru and Bolivia, and their wedding in Antigua.  Francois and Joan travel small and light.  I admire their compact truck camper.

It’s a “Getaway” truck camper that was custom built for a hunter.

We give each other tours of our little homes.

Francois says, “You know, that wasn’t a coyote we saw last night.  That was a kitfox.”

“A kitfox!  I’ve heard about them, but I’ve never seen one.  You’re probably right.  It certainly didn’t move like a coyote.”

“And it had that long, bushy tail,” Francois adds.

That evening, as I’m once again sitting in the campsite enjoying the cool breezes that dusk brings, we have a visitor.  A tarantula walks right up to where we are sitting!

I throw the crew back into their pen and watch as the furry, black creature slowly moves through our campsite and out across the camp road.

Coming out of the BLT, I see that Joan and Francois have moved to another site.  Later I learn they were inundated with yellow bees.  The bees obviously were seeking moisture as they got into their drinks and cookware.  More and more kept arriving until there were hundreds.  Fortunately, they weren’t the biting kind.  “We had to move.”  Their site was close to the water spigot, which probably didn’t help.

I tell Joan and Francois about Sawtooth Canyon Campground.

They’re going to stop there for a night or two on their way to Baja California.  Ranger Jim comes by again and picks up the trash.  He reports that “about five hundred rock climbers” were at Sawtooth last weekend, ” . . . but they were all well-behaved.  Didn’t make any trouble.”

The crew and I are going to stay at Owl Canyon at least until Thursday.

Then I’ll decide whether to continue camping here through the weekend, or move down to Sawtooth Canyon.  If we go to Sawtooth on Thursday only to wake up to hoards of people coming in on Friday, we’ll continue further toward Joshua Tree National Park, a planned destination anyway.

Note:  A reader wrote a comment that what we saw was probably a grey fox.  I believe he is correct.  The animal was large for a kitfox and I think I saw a black stripe on its bushy tail.  BTW, to read or write comments, simply click on the word “comments” at the end of the blog entry.  Thank you, Rand, for teaching me the difference between a kit fox and a grey fox. 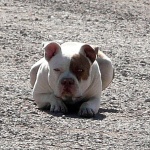 Submissive or crouched to attack?

RVSue, the Bridge, and I are on our way to the self-pay station.  I hang back a bit because I have some serious sniffing around to do.

Up ahead, RVSue spots a dog crouched in the roadway, staring at her and the Bridge.  The dog sprints toward them.  This causes RVSue to panic and scoop up the Bridge.  She screams, “No!  Go away!” and runs away.

Well, I could see that this was not a mean canine.  I go up to the poor guy.  He’s wagging his big ol’ floppy tail.  I sniff hello and tell him my name is Spike.

“A pit bull?  That’s okay.  I get that all the time.  Say, I’m kinda down on my luck right now.  You know where I guy could scrape up some grub?”

At this point I’m thinking what a sorry sight this dog is, out here in the desert by himself, not a house for miles around.  He reminds me of myself, before RVSue took me in.  A plan forms in my razor sharp, canine mind.

“I tell you what you do, Buddy.  I think we’re goin’ into town this morning.  Hang out right here by the entrance where RVSue will see you.  She always has jugs of water on board and a back-up bag of kibble.  It ain’t roast beef, but it’ll fill you up.”

In spite of the fact that the guy says stuff like “much obliged,” he seems like an okay fella.  And a fella’s gotta eat.

Sure enough.  We drive out of the campground, Buddy’s waiting at his station, and RVSue’s foot goes to the brake 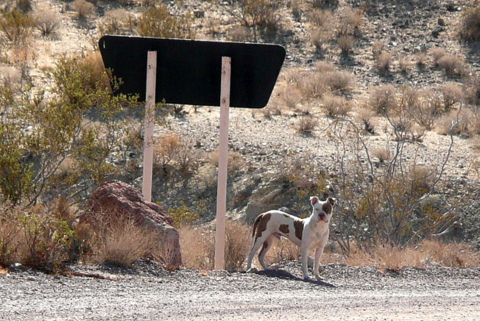 Right according to my plan, she scoops out four big heaps of kibble and sets it out with a bowl of water.  As we drive away, I look back and see Buddy scarfing down the kibble. 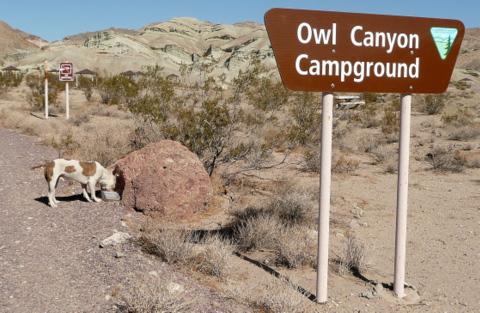 The hungry traveler fills his belly.

I think about the life I have with RVSue and the Bridge, compared to the life of this homeless, desert dog.

37 Responses to Wildlife in the desert