I run out the door in my nightie with camera in hand.

Almost every morning since we’ve camped in the Alabama Hills I’ve seen the mountains turn an orangey-pink.  It only lasts a few minutes before they turn back to silver-grey.  “Got it!”

The crew and I are on our way to take a look at Lone Pine Campground.

The last time I went up this way I didn’t have a camera.

It’s much closer to the Sierra Nevada than our boondock in the Alabama Hills.  It’s close enough to the mountains to be visited by bears. 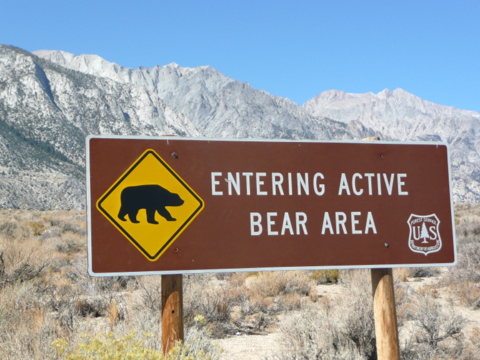 We find the campground is tightly designed with campsites close together with trees and a lot of bushes.

The paved campground road is very narrow and the sites are short.  The campers here are truck campers, a Class B, and tents.

I get the impression people camp here who have permits to hike and climb the mountains.

I also want to take another look at Tuttle Campground.

A long view of the approach to the campground 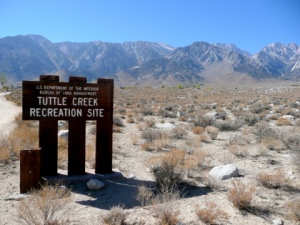 Tuttle is off Whitney Portal Road, closer to where we’re boondocked.  It’s $5 a night and only $2.50 with a Senior Pass.

I consider camping here for the last two nights of our 14-day limit, but as I drive around the campground I decide we won’t.  The campground does have an unobstructed view of the Sierra Nevada, but it also has a lot of rigs relying on generators.

One of the campsites at Tuttle

As I’m driving toward the exit I come upon a sign that boondockers love to see.

Just what I’ve been looking for!

I have eight empty gallon jugs that need filling.

I use empty tea containers, the Arizona brand.  The jugs have a picture of Andy Palmer on the front.  I like the Arizona lemonade-tea drink and the jugs it comes in are very sturdy and long-lasting with screw-on tops.

For several months I intended to buy a couple 3-gallon water containers from Wal-Mart and never accomplished that.  It’s just as well because these one-gallon jugs work great for me and they’re not heavy when full.

The fresh water tank in the Best Little Trailer is about three-fourths full.

I use that water mostly for washing my face and hands, brushing my teeth, and flushing the toilet.  I like to use the water in the jugs for sponge baths, the crew’s water dish, cooking water, and water for the percolator.  That way I’m boiling the water before I drink it.  It’s probably not necessary, but the extra precaution doesn’t hurt.

The dump station fee is $5.

I decide I’ll pull the BLT up to Tuttle Campground to take care of that task the day we leave the Alabama Hills and Lone Pine, probably Sunday.

The crew and I tootle on down Highway 395, heading south.

It’s a warm afternoon and the Perfect Tow Vehicle’s air conditioning feels good.  Bridget and Spike love the A/C and have fallen asleep.  I want to take a look at the campground at Diaz Lake, a few miles south of Lone Pine.

Diaz Lake turns out to be what I would call a large pond.  The campground  is attractive with a swimming beach, dock, boat ramp, playground, yellow cottonwood trees, and well-kept grounds.

Out of curiosity I stop at the fee station.

A man suddenly appears.  “Hello!  How much is it a night?” I call out.  He responds that it’s $25.  “Thank you.  It’s very pretty here.”  I get back in the PTV and pull out.  Gee, maybe if he lowered the price during the off-season he’d have some campers here.  Well, after a year of full-timing it, we have yet to stay in a private campground. 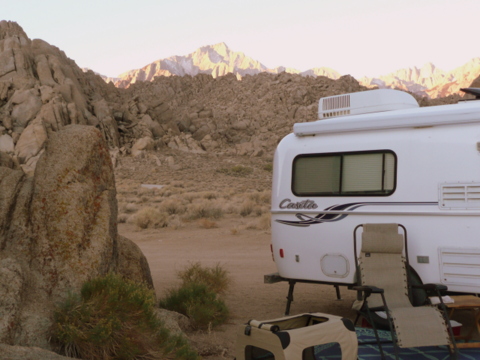 We already have a great site and it’s free!

I’m finishing up a stack of paperbacks I borrowed from the Lone Pine library with my temporary card.  I have a Kindle that I read from, but sometimes it’s nice to have a book in your hand, and I always like a leisurely browse at the local library.

I have to be more careful with the crew now.

Coyotes moved into the area last night.  I could hear them yipping through our open window, right over where some people were sleeping in a tent.  I bet that gave them a jolt.  Now that we’re back in the desert the night sky shows a zillion stars. 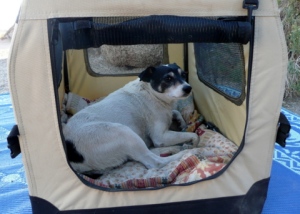 “Hey, Bridge!  Thanks for letting me in the condo.  I’m sorry about teasing you.”

“I accept your apology, Spike.  I do wish you would stop making fun of me though.  I’m sensitive about my weight.  Saying stuff like ‘Caution. Wide load coming through’  hurts my feelings.”

“And constantly telling me I should lay off the kibble isn’t?  I can’t enjoy a meal without you making a smarty remark.”

61 Responses to Boondocking’s the best!