Smoke, wind, and cold! This is August?

I wake to the smell of smoke.  Oh yeah, the forest fire.  After our morning routine, the crew and I travel the seventeen miles north to Dillon.  The horizon in all directions is obscured by smoke.  At the laundromat I leave Bridget and Spike in the PTV while I throw a few loads of laundry in washers and dash across the street to the Ace Hardware store.  I buy some replacement clips for the exercise pen.  After the laundry is done, folded, and packed into the PTV, we stop at Safeway for groceries.  I buy food and four gallons of drinking water.  That campground water out of that humongous hand pump is horrible!

Back at Clark Canyon Reservoir, I park at the top of the gravel ramp leading down to the campground.

I take this photo, similar to one I took previously.  The mountains are barely visible.

The wind picks up this afternoon which clears the air enough so we can go outside.  The three of us walk around the campground.  Bridget and Spike need more outdoors time, so I put them in their pen.  I sit next to them and read.

Around five o’clock the breeze is gone.

The smoke becomes unbearable, so we head inside. 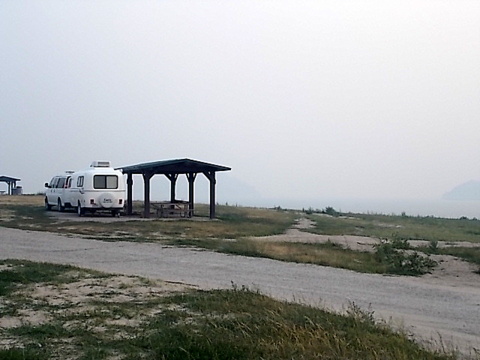 The view of the reservoir can’t be seen because of the smoke.

Around seven Bridget and Spike insist on their nightly walk.  We don’t get far.  My throat is okay, probably because I haven’t had the need to talk much, but my nasal passages are irritated.  I detect a slight shortness of breath.  Worst of all, once back inside the BLT, I can hear Spike’s breathing is labored.

I could drive us out of this, but where do we go?  We’d have to go pretty far to escape it. The smoke covers a large area in all directions.  I certainly don’t want us in a forest campground somewhere with no internet coverage.  I have to be in Dillon around the 20th of this month in order to pick up the vehicle registration renewals at the post office.

It’s easy to complain about this, but I’m not going to.

So many people are suffering with these fires and the smoke.  Thank God I don’t have respiratory problems.  I pity the people who do.  Now that Spike’s been inside for a while, he’s breathing normally again.  Sweet little boy is fast asleep.  Bridget, too, bless her heart.

The setting sun through clouds of smoke

If the smoke cover follows the pattern of the last 48 hours, it should be much clearer in the morning.  I hope so!

The wind howls and rocks the BLT starting around 2 a.m. this morning.  This is a good thing.  I hear my camp chair hitting the picnic table.  At least the wind will clear the air.  The smoke is mostly gone when we emerge a little past daybreak.  Man, is it cold!  I wish I had my winter coat on.  Well, I guess this is Montana in August.  It’s freezing!  I wonder what it’s doing back in Georgia right now. 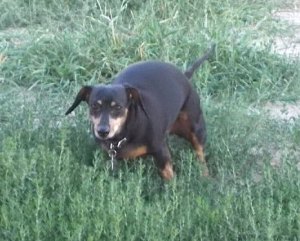 An early morning trespasser at our campsite!

“As you know, Spike got rvsue in trouble because he was over by the camp host’s trailer, sniffing around.  It’s not fair. I see canine campers off-leash all the time, and they get away with it.  They should get in trouble for that.

Truth be told — and I always tell the truth because I’m a good girl — Spike really had no business going over there, but you can’t tell him that.  Oh, no.  Once Spike gets his mind set on something, there’s no changing it.

I heard rvsue say once that Spike’s stubborn because he’s a terrier.  She said, “He’s got that terrier Ten Ass City.”  Well, I’m a terrier and I’ve never been to Ten Ass City.  I hope we never camp there.  It doesn’t sound like a very nice place!”

46 Responses to Smoke, wind, and cold! This is August?