Last day along the Madison River watching the floaters go by

Posted on August 5, 2012 by rvsueandcrew

I like to leave a camp before I take it for granted.

Today is our last full day beside the Madison River in southwestern Montana.  Of all the places the crew and I have made our home during our first wonderful year as fulltime vagabonds, I rank this place as one of the best.

Bureau of Land Management campsites can be found on both sides of the Madison, most between Norris and Bozeman.

Those dispersed sites are $5.00 a night or $2.50 with the Senior Pass.  I chose this more developed BLM campground for the vault toilets, water spigot, and gravel road that keeps the dust down.  It’s only $1.50 more and well worth it, especially since the availability of vault toilets eliminated the need to move the Best Little Trailer for a dump station visit.

In a few weeks Montana children will be back in school.

This far north one already can see trace evidence of the coming fall.  The nights are cooler.  Early this morning I had to get out of bed to put on my fleece pullover and socks.  The quilt wasn’t enough. 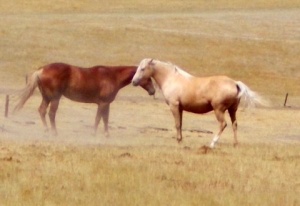 It looks like we are the first ones up and about.  Bridget and Spike follow the routine they established the first day here.  I watch them walk over to a high grass field adjacent to the campground where they do their duty.  Bridget comes back immediately.

Of course, Spike takes the opportunity presented by sleeping campers to snoop around their campsites.

First task of the day is to check air pressure in the tires.

I press all the air out of the inflatable canoe, roll it up, and bag it.

I stow the bag, weighing 50 pounds, behind the driver’s seat, and slide the paddles in the back of the Perfect Tow Vehicle.

I clean the windshield inside and out.  Next I wipe the bugs off the PTV’s hood with a wet Bounce sheet.  I usually do that when we first make camp, but I never got around to it.

It’s Sunday and lots of floaters drift by.

Some of the tubes, rafts, and other inflatables are tied together in big clumps of bright colors, holding as many as twelve people, maybe more.

I pour myself a drink, set my chair at the river’s edge, and watch the passing aquatic parade.  Two large groups engage in a fierce, laughing battle, shooting plumes of water from long-barreled, plastic cannons and pitching buckets of water.

A few floaters stand serenely, skimming along on surf boards.  A black Labrador retriever swims alongside his master’s craft.  Some dogs ride, happy to be included in the fun.

I don’t know where we are going, except that first we probably will head toward Bozeman and then turn due north the short distance to Belgrade, a town along Interstate 90.  Camper Marianne told me there’s a free dump station at the Exxon station, and also propane available for purchase.  I’ll stock up on groceries there, too.  I need to remember to put water in the fresh water tank on the way out of the campground in the morning.

I’d like another river camp or one by a small lake.

The mountains at this latitude may be too cold at night, and not warm enough during the day.  I’m enjoying the dry heat of Montana summer found at lower elevations.  Makes the swimming all the better!

We could go west and then south to camp along the Wise River.

Or we could go east and then south into Paradise Valley and camp along the Yellowstone River north of the national park.

I don’t want to take us much further north than we are here.  There’s plenty of new adventure between Montana and southern Arizona, our winter destination.

Wherever we make camp tomorrow, internet connection is unlikely, due to the mountain ranges the rivers flow between.

I expect Bridget, Spike, and I will swim and soak in the river in front of our campsite several times today.  Yes, it’s been a great camp.  Definitely one of the best!