Here we are camped along the Snake River a few miles south of Yellowstone National Park with a view of the Teton Mountains.  Soon after we arrive, the guy camped next to us comes back, packs up, and leaves.

Good!  Arrivederci, fella.’  Heh, heh.  Now we have the place to ourselves.  The crew and I laze away the day playing in the river, relaxing under our pine tree while I read a book, and walking the road along the meadow that borders the campground.

They eat their supper sitting on the rocks along the river.  Later, when darkness comes, they disappear inside their tent for the night, not a sound out of them.  Their presence is easily ignored.

Also arriving is a family consisting of a husband, wife, two preteen girls, and a boy of about five.  They immediately run down to the river.  I look up from my book. Something about their movements and voices tells me they are not used to being in open, unmanicured country.  I’m sincerely pleased to see them discovering and appreciating the natural wonders of this place.

Together the family sets up a tent.

They eat supper at their picnic table.  Shortly after sunset, a coyote howls and yips from across the river, downstream.  All five members of the family run past my window to take the path down to the river.  They obviously want to see the coyote.  While they’re standing in a cluster next to the river, looking downstream, a horrific roar rips across the water from upstream.  I don’t know what form of life produced the sound, but it is undeniably wild and ferocious.  The father reacts the most visibly, jerking up his shoulders and elbows as he whips his head around, eyes bulging, mouth open.

What happens next gives me chuckles every time I recall it.

The father, showing absolutely no concern for the safety of any member of his family, darts toward the path.  He’s not a very tall man, so only his bald head is visible as he crashes through the willow bushes.  He sprints past my window and flies into their tent. Tight behind him are the preteen girls, followed by the little boy, with the mother bringing up the rear.  None of them stops running until in the tent.

That’s the last I saw of them. They were gone when I woke at dawn.

I decide to put off our excursion into Yellowstone for a day. Today I read my book, putter around, and simply enjoy our camp.  The quiet here is wonderful.  The young women have left for the day.  The only sounds are birds, an occasional chatty squirrel, and the happy river. Spike and I wade while Bridget watches.   Ah, this is the life.  I can see us staying here for the fourteen-day limit.  It’s a convenient, central location for exploring Yellowstone and the Tetons, and a lovely, restful place to come home to. 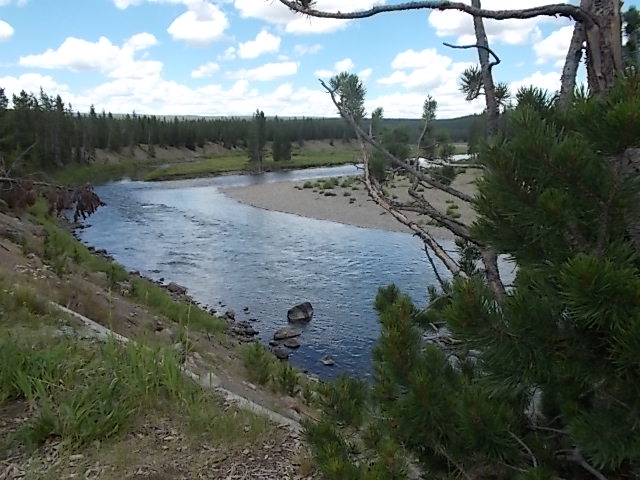 Around four o’clock a Toyota SUV pulls in.

Two young women get out. They’re talking non-stop.  I can hear every word, even though I’m inside the BLT.   A minute later another SUV pulls in and two more young women get out.  The four women squeal with excitement, and the chatter is ramped up a few more notches. Again, I can hear every word.  A half-hour later the loud talking and laughing is still going strong.  Geez, people.  Calm down.  You aren’t in the food court at the mall.

Then ANOTHER SUV pulls in and two fortyish women jump out.  Now we’ve got six, high-pitched voices squealing and shrieking at each other. They are SO happy to be together again.  Okay.  I’m happy you’re happy.  Happy, happy, happy.  Now settle down for a quiet evening of normal conversation.

Oh nooooooo.  Not these people.

They talk, shriek, guffaw, holler . . .  non-stop, for HOURS.  For heaven’s sake.  Aren’t your jaws tired?  They don’t bother to walk down to the river.  They don’t shut up to eat.  Their cars are parked about twenty to thirty feet from the BLT.  What do they do?  Wait until it’s almost nightfall to start getting set up for the night.  Three SUVS have a lot of doors for six women to open and slam shut because they need to get something out or put something back, talking constantly, of course.  Slam, slam, slam, shriek, holler, slam, laugh, squeal, holler, slam, slam, SLAM!   Okay, patience . . . patience.  Don’t ruin their fun.  I close all the windows of the BLT in hopes of getting some sleep.  Soon it’s too hot and stuffy.  I can hear what they’re saying anyway, even with the windows closed.

There are no lights on in the BLT.

The tent with the quiet women in it is dark. Obviously we’re trying to sleep.  This has no bearing on our happy campers. These yappers can’t even go to the vault toilet alone.  They have to walk past my bedroom window in pairs so they can TALK all the way.  “Oh, look!  Look!  It’s over there!  Is that a frog or a toad?”  I hear two women scrunching around on the gravel outside my window.  I lift a slat of the window blind.  They’re bent over their flashlight beams.  The frog vs. toad discussion continues.  For the love of God, go to the dang toilet and SHUT UP!

At ten minutes before eleven, my patience runs out.

I lift the blind and pull the back window open wide.  I speak in a normal volume. However, my tone reveals extreme, pent-up rage about to burst into a verbal fireball the likes of which these gentle women have never heard.

This – or maybe the unfamiliar sound of silence that follows — apparently shocks them all into realizing the ruckus they have kept up for the past several hours.  I don’t hear another peep out of them.  Gee, I was ready to REALLY let them have it.

I wake, as usual, at sunrise.  Of course, the yakkety-yakkers are asleep.  The crew and I creep out and pad on down the path to the river.  A thick mist rises from the water. The night chill is still in the air.  I look upstream.  At that moment a red deer appears and walks slowly toward the river.  She enters the water, and continues to walk without hesitation until the water is up to her neck, and then swims the rest of the way.   She bounds up the opposite bank, stops and holds a graceful pose for a brief moment, as if to show off her lovely profile cloaked in the mist, and then silently disappears into the willows.

By the time the crew and I have eaten breakfast and I’ve drunk my coffee, I can hear the voices of the blabbity-blabs emanating from their tents.  Spike, Bridget, and I quickly board the PTV.  I turn the key and put her in gear.  “Okay, guys!  Off we go to Yellowstone!”

Pole Cat Creek, near our campsite