I step out of the Best Little Trailer into the brisk, fresh, morning air.

I feel a burst of ambition and decide to spiff up the  Perfect Tow Vehicle.

Bridget wonders what I’m going to do next.

Well, maybe just the hood.  I’m not THAT ambitious.  The PTV’s hood is splattered with buggy stuff and its paint has been chipped off in a few places.  I clean the hood with some wet Bounce fabric softener sheets, and then I use my auto paint pen to cover the chips with white paint.  I apply NuPolish and wipe it off once it’s a haze.   Now I have a filthy van with a very shiny hood!

Inside the PTV dust and sand has crawled into every crevice.  I have just enough ambition left to clean the dash area and wipe it down with vinyl protectorant.

While cleaning a young couple appears.

“We’re looking for the subway,” the young man announced earnestly.  “Do you know where it is?”

Given that I’m into my third week of dieting, I immediately picture a very large, bulging sandwich, and then I think of underground transportation, given that I’m a native New Yorker, albeit upstate.

“The subway?” I respond.

“Yeah, it’s a trailhead around here.  We parked our car up the road about five miles and have been walking this way a long time.  We should have reached it by now.”  He pulls out a map.  “Here we are, I think.”

He points to a place on the map that definitely is not where we are.

“No, you’re way down here.”  He looks where I’m pointing on the map.  “It’s about 25 miles from here to Kolob Reservoir.  If you estimate you walked about five miles, then your car is parked right about here.”  I’m pointing nowhere near where they think they parked.  So you need to go back to your car and drive up to  . . .  and so on.

But youth being what it is, they are not dismayed.

Apparently with energy to spare and before I can even think to ask them if they want a ride, they cheerfully throw thank yous over their shoulders and disappear beyond the brush.   Judging from the expensive hiking boots, he probably wouldn’t want a ride anyway.  This way they made a minor miscalculation.  Otherwise, they were lost and had to be driven back.

Geri stops by our campsite to deliver my shipments from Amazon.

I ordered six Benchmark maps like the Oregon one that Rusty aka Three Feathers gave me.   (https://rvsueandcrew.com/2012/04/16/the-mountain-mans-gift/ ) 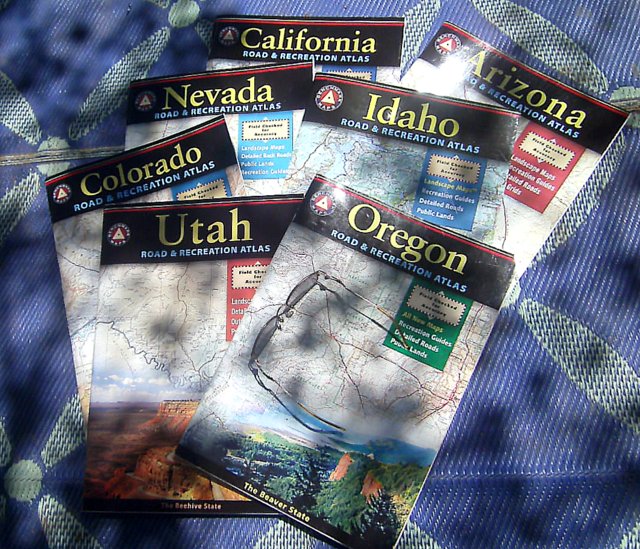 Plus I ordered a monocular, a water bandit, a water tank filler, and a Bal leveler.

Everything has come in except the Bal leveler, the costliest item.

Geri and I talk for a while and then she invites me and the crew to supper!

When we arrive at their place in Zion River RV Resort, Geri has a casserole dish of enchiladas in her toaster oven.  The toaster oven is plugged into an outside outlet on her and Chuck’s fifth wheel.  “It’s too hot to use it inside,” she explains.

Chuck, Geri, and I sit in camp chairs on their lawn, talking and watching the numerous hummingbirds at their three feeders.

Geri hands me a sun tea.  She makes them in individual glass bottles.  That way they don’t take up as much room in the refrigerator.  All you have to do is drop in two teabags – Geri likes herbals – and place the bottle in the sun for about five or six hours. 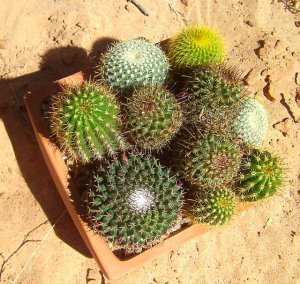 The cactus garden I give my hostess and friend.

“We’re having enchiladas, but I don’t wrap them up.  I layer them,” Geri tells me as she places the casserole dish on a small table.  The surface of the casserole is golden cheese, lightly browned.

“Oh, so you make it like lasagna.”   She ladles me out a hefty portion.  I can see she’s used chicken for the meat.

That’s what you’re thinking, right?  Well, I couldn’t refuse dinner from my good friends, now, could I?  For heaven’s sake, it’s just one meal.   I’ll go back to eating gruel and Greek wallpaper paste tomorrow.

After dinner the three of us walk their “Hound Herd” and the crew.

Dianne and Roger of www.travelwithwhippets.blogspot.com come out of their motorhome as we pass by.  They give attention to each of the canines.  Roger pets Spike and tells him that he knows all about his behavior in the water. “Yeah, his reputation precedes him,” I remark wryly.

We approach the PTV parked in a space by the Resort’s office.

I open the side door for Bridget and Spike, and they hop in.  I exchange thank yous and hugs with Chuck and Geri.  “Well, we’d better be going home.  I’ve got a blog to write.”

45 Responses to Subway, Mickey Mouse, and dinner with friends