These new National Forest rules have got people in a tizzy.

The crew and I go on our usual long hike this morning, this time following the forest road further than we’ve gone before.  We happen upon a couple who brought out their three dogs for exercise this Sunday morning.  The woman tells me if we keep going we’ll come to a pond.

We say goodbye and the crew and I continue until we find the pond. 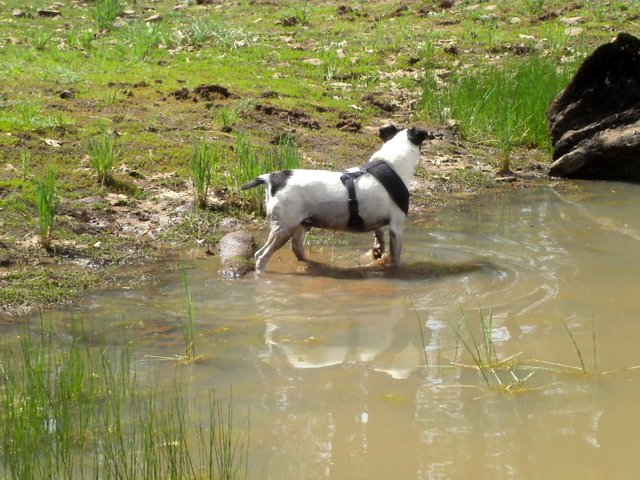 Spike never passes up an opportunity to get in the water.

I wouldn’t call it a pond.  It’s more like a watering hole.  Hmmm . . . the water explains why Ken saw an elk down this way.  By the looks of the tracks, it’s an elk corridor. Darn, I want to see an elk!  Of course, Spike takes a soak while Bridget and I wait. 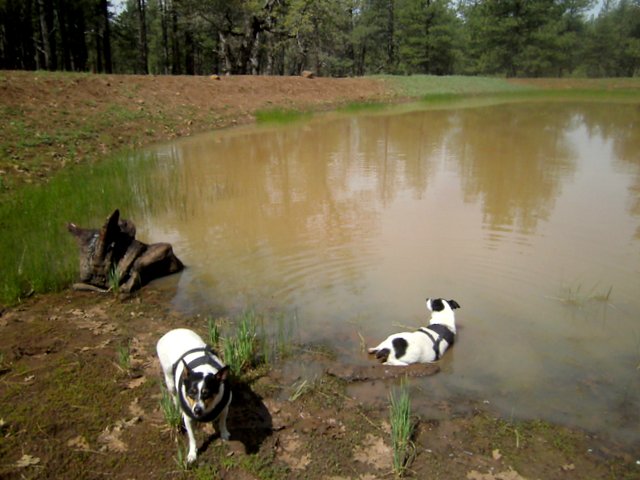 Getting back to the National Forest rules . . . 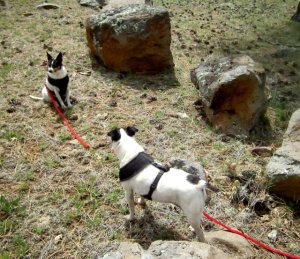 On our way back to our campsite, the crew and I see Gail outside her motorhome.  She calls us over.

She wants to tell me about the National Forest volunteer who stopped by.

“We talked for a long time.  He’s a really nice guy, but the first thing he says is I’m parked too far from the road.”

She’s got my interest with that opener!

I pull up a lawn chair and sit next to her in the shade of her motorhome.

“He says ‘You gotta be within thirty feet of the road’ and I tell him, ‘Oh no, that’s in a regular campground.  Out here in a dispersed camping area, it’s within three hundred feet of the road.  I know.  I looked it up.’”  Gail states the obvious — that this volunteer doesn’t know the rules, but he’s a nice guy anyway.

Besides the distance rules, the enforcement of the 14-day limit is a big issue on Gail’s mind. 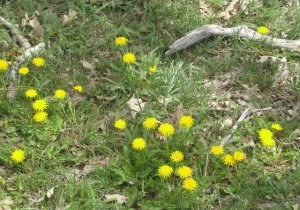 Why do people hate dandelions?

Last year she stayed here all summer.  No doubt she wants to do the same this year.

“He doesn’t seem to care how long you stay.  He even suggested I can move over to the other side of the campground, now that the off-roaders’ ruts have dried and you can get up that road.  I had to explain to him that after fourteen days you have to move to another forest.  This guy doesn’t know much about the rules.”

Ken pulls up in his Class C with Scooter in the passenger seat.

They’ve been to PetCo in Flagstaff so Scooter could be vaccinated for rabies.  Gail is anxious to tell Ken about the visit by the forest volunteer.

It’s fun listening to Ken and Gail discuss a hot topic like this.

Ken considers himself a realist, although some might say he’s a bald-faced pessimist working his way up to paranoid.  Gail, on the other hand, is an optimist to the nth degree.  With Gail, everything will turn out okay.  According to Ken, “Gail lives in a fantasy world.”

Gail is smiling with her news.  “I don’t think they’re gonna’ hassle us here, Ken.”  She relates the pleasant interchange she experienced with the National Forest volunteer.

Ken frowns.   He’s not impressed.  “Yeah, but he’s got no authority.  It’s the rangers you gotta worry about.“

It’s Gail’s turn.  “He’s a really nice guy.  He volunteers because he loves the forest.”

Ken counters!  “Yeah, well, nice guy or not, I hate to tell ya’, it doesn’t matter what he is, if the rangers want to hassle you.”

Gail comes back!  “There aren’t enough rangers to keep track, so no need to worry about it.  I like this volunteer.  It’s good to have someone on our side.”

Ken is not out yet!  “What good is that going to do?  Rules are rules.  I’m thinkin’ about leaving.”

And here’s Gail, coming back once more, the clock is ticking, and it’s . . . GAIL!  “I told him to stop back by after he’s checked the rules, so we can talk some more.”  She’s still smiling.

Ken’s ready to forfeit.  He starts to head back to his campsite nearby.  He sends a parting shot, throwing up his hands.  “These new rules.  Nobody knows nothing.  It’s too confusing.”

Gail makes the final point.  “Oh I forgot to tell you.  On Mother’s Day weekend they’re going to be down by the gate handing out papers on the new rules, explaining them to everybody.”

Ken rolls his eyes and leaves. 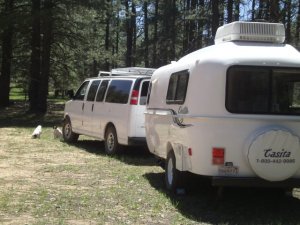 Without a doubt, Ken and Gail think I’m a complete idiot because, throughout the conversation, I sit between them saying nothing, except to break into frequent fits of laughter.

76 Responses to Dispersed camping at Willard Springs, AZ, and racquetball