It’s time to get moving again! 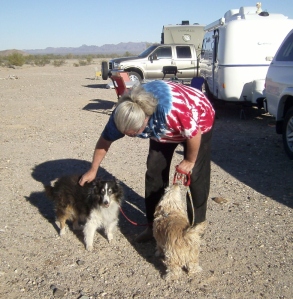 Chuck with Scotty and Doogie

Chuck and Geri rolled into Yuma yesterday afternoon and parked their fifth wheel next to our Casita.  It was good to see them again!

Bridget and Spike remembered their friends from Thanksgiving Day . . . Scotty the Sheltie, Doogie the Dandie Dinmont Terrier, and Radar the, uh, the little dog with thick brown fur, slanty eyes, ears that stick out, and a cute personality.

This morning I drive Geri over to Walmart so she can stock up for our stay at Quartzsite.   I get a little, folding, charcoal grill and a bag of charcoal, as well as some firewood.

We leave Fortuna Pond around noon and head north on Highway 95.  It’s a warm, sunny day with a cloudless, blue sky.

I’m happy to be on the road after staying in one spot for over a week.

I’m ready for my first Quartzsite experience!  People who drive Highway 95 regularly probably think it’s a boring drive, but I’m wide-eyed the whole way.  The mountains on the right are huge, craggy monsters, while on the left are rolling mounds dotted with desert plants.

As you approach the town of Quartzsite you see rvs strewn all over the landscape on both sides of the highway, and once in the town of Quartzsite a definite carnival atmosphere takes over.  Vendors  show off their wares along the way and RV lots dominate the scene.  Chuck deftly leads me through the town and out to where the Casitas are gathering . . . Dome Rock.

There’s something about Casitas.

The sight of a covey of Casitas parked together in a circle makes me smile.  Even though Chuck and Geri have a big Evergreen fifth wheel, they’re still Casita people at heart, both of them having owned their own Casita separately before they were married.   I park my trailer in such a way to continue the circle.  More Casitas are expected later today.

I’m introduced to some of the folks here and the crew meets some canines.

Spike, Mr. Sociability, is loving every minute.  He meets Diego the Italian Greyhound, a beagle, and a dachshund, whose names I’ve forgotten.  At one point, after dragging Spike and walking Bridget back to our Casita, I loop his lead and Bridget’s lead onto the tongue of the Casita so I can go inside for a minute.  I come out and there’s Bridget all by herself, sitting next to Spike’s empty harness.  That guy!  He can’t get enough of the excitement of meeting new people and dogs!  I see he’s gone all the way back to where his new friends live.  Once again I chase him down.  So much for his new year’s resolution!

A bunch of the people take off to go back into town for all-you-can-eat fish fry.

I’m happy to retreat to my home, heat up a bowl of soup for supper, and get online to blog.  Geri decides to pass on the fish fry, too, and is in her home next door with her Hound Herd.  Tomorrow everyone is getting together at noon to roast hot dogs.   I’ll try to get some good photos to post here of the different Casitas, plus the vintage trailer. 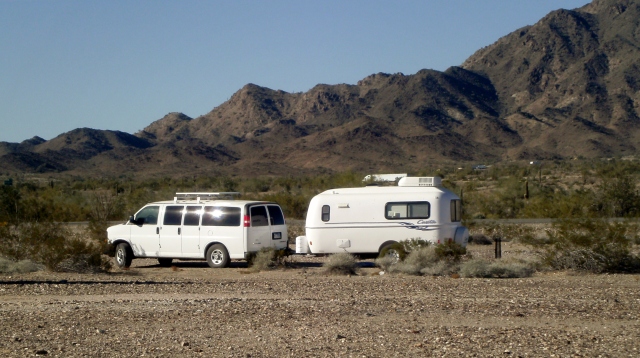 Setting up at a new campsite is one of my favorite things to do.

I think Spike overdid it today.

He’s moaning softly as he tries to go to sleep.  I wrap a buffered children’s aspirin in some cheese and he takes it, no problem.  He’ll be fine in a few minutes.   A person can be told to slow down and pace themselves, but a dog?  There’s no slowing down Spike!  If he wants to be a social butterfly, that’s what he’s going to be!