Rain on the roof

(Today’s photos are from a previous, sunnier day.)

I don’t bother to put the crew in their suits for the first potty break this morning.  Spike hates rain so I can count on him running back into the Casita as soon as his job is done.  Bridget expects me to carry her to a bush so she can squat. Then she looks up at me wanting a ride back to the Casita door, a trip of about twenty feet.

I put the percolator on the stove and some kibble in the crew’s dish.

Bridget and Spike share one food dish because they never eat out of it anyway.  Spike knocks the kibble out of the dish.  Once the food is scattered about, the munching begins.  I wait for them to finish before I sit on the floor to light the heater.  Then I pour a bowl of raisin bran to go with my coffee while reading the blog comments since last night.

Bridget and Spike will be occupied and less likely to whine to go out.  As for me, my morning task is reading in bed.  Around eleven, the rain lets up a bit and I’m surprised to see some action at my birdfeeder.  I guess I won’t scrap it after all.

The crew and I head out to investigate a new trail.

We walk up the road and down into a wash.  Rather than sharp stones under their paws, the wash is wet, smooth, gritty sand.  After a few minutes of walking, I sense a feeling of vulnerability.  The wash now has high sides with overhanging branches.  I don’t like us being low. . . too easy to be pounced upon and I can’t see what’s going on around us.  I turn us back for the dirt road.  Bridget and Spike seem less wary up here, too.

A look at the sky tells me these clouds aren’t going away soon.

Well, it is winter, I remind myself.  I chuckle out loud.  Be thankful you’re not up to your arse in snow.  This will do just fine for a day in December.  From the looks of things, the weather is kind of dreary all across a large swath of the Southwest.  It’s been so damp I see tiny sprouts of grass, as if the desert thinks it’s springtime. 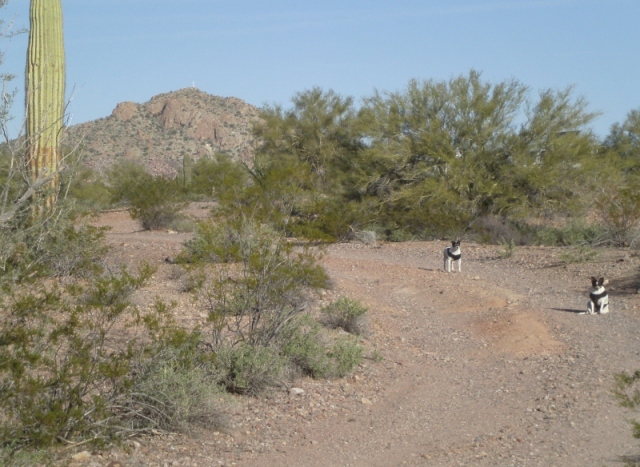 The dirt lane that leads to our campsite

Soon I’ll have to do laundry and dump tanks.

Rick tells me to go to Belly Acres RV Park in Ajo.  I can dump tanks there for ten dollars, he thinks.  He doesn’t know for sure because he stopped using his toilet a long time ago, using a porta-potty instead.  Occasionally he takes the container down to the fair grounds to dump (free).  That way he doesn’t have to hitch up and move his entire home.

Rick's Scamp and Jeep at his campsite

I’ll need to fill my water tank soon, too.

“I don’t imagine Belly Acres allows campers to pull in there just to dump and fill up with water,” I say.

“It’s okay to fill up containers, like three-gallon or five-gallon, and then you can put the water in your tank if you want,” Rick explains.  “Do you have any containers?”

I tell him I don’t, but I’ll get some the first chance I get, the three-gallon ones.  Five gallons of water is probably too heavy.  I’m going to need the containers anyway when I go to Quartzite or any remote boondocking location.

“And you can get drinking jugs filled for twenty-five cents down in town,” he adds.

I’ve seen those dispensers.  I’ve got five one-gallon jugs of drinking water that I bought at the Walmart back in Benson.  Once they’re empty, I’ll fill them back up at twenty-five cents a pop.

Non-rv people probably think this is a pain.

“Look at all the trouble you go through just to have water and to use a toilet.”  I can hear them saying. “Wouldn’t you rather be in a house with unlimited water on tap and a septic tank?”

Fulltime nomad
View all posts by rvsueandcrew →
This entry was posted in Getting Ready To Go and tagged Ajo, Arizona, desert, dogs, fulltiming, rv park, RVing. Bookmark the permalink.

40 Responses to Rain on the roof