Posted on September 14, 2011 by rvsueandcrew

This post is for Sunday, September 10th.  It is one in a series of entries that were posted late due to lack of internet signal.

Here's Spike, straining at his leash to get down to the water!

The electric hook-up campground was practically empty when we arrived on Thursday.

Of course, this means radios, children on bikes screaming, a man making a totally unnecessary holler across the campground, the usual behaviors, and dogs.

Five dogs, to be exact, four of them walking on leashes alongside their considerate owners, and one dog, running like a fool all over the place and not alongside his fool of an owner. 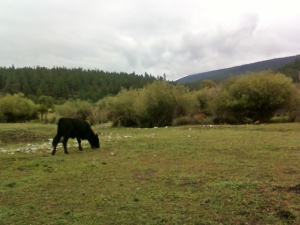 One brisk morning we watched a calf nursing. She was so hungry for that warm milk!

The crew and I have enjoyed living alongside Coyote Creek and these beautiful mountains.

Boy, two eggs over easy with toast, orange juice, and coffee sure do taste good outside in the mountain air.

The first two full days here were overcast.  Then the days turned sunny, yet pleasantly cool.  It did get down to 42 degrees by this morning.

We were warm and cozy all night.

Daniel, the park guy, drives through the campground at least once a day in his white New Mexico pick-up.  He stops for a brief chat, asking me if I need anything.  I introduced myself to Daniel shortly after arrival.  I think it is a good idea to do that, when possible.

I sit in my camp chair next to Spike and Bridget in their pen.

The pen goes around the picnic table.

A family consisting of grandfather, father, mother, four little girls under the age of eight, including a toddler, and two big dogs burst on the scene yesterday morning.

Today they march across the grass between the campsite and the creek, toting fishing gear.

They cross the footbridge, jabbering away with excitement, and go upstream a short distance.

They can’t be seen, only heard.

After a time of fussing around, all was quiet.

Then the shout of an young girl is heard all over the campground.

Then a little later, “It’s a trout!  I caught a trout! It’s eight inches long! I caught it!”

Bless her heart.  She’ll remember that for the rest of her life.

A young man walks by with a string of six trout all about eight inches long.  I could tell by looking at him that he knew what he was doing.

Spike, Bridget, and I hike a trail through the woods. 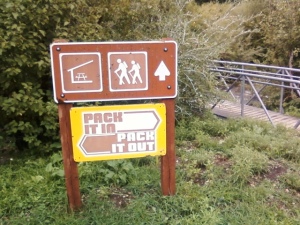 Pack in, Pack out.

The crew love following a trail, especially when it’s the soft earth of the woodland, rather than the rocks and prickly grass of the desert.

They walk really well on a leash together and without any training!

Bridget has become much better at avoiding the “I’ll go this way around the tree while you go around the other way” tangle of leashes.

Two ladies have the crew and me over to their campsite for dinner! 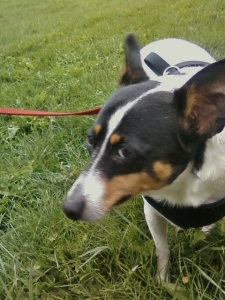 "Spike is such a hog. He tried to grab my country-fried steak!"

They’ve travelled all over in their Pleasureway Class B camper, recently returning from Glacier National Park.   We have a wonderful conversation before and during dinner with much laughter and comaraderie.

They serve country fried steak, the best I’ve ever eaten.  Also on the picnic table is some delicious Louisiana pecan rice, steamed broccoli, and rolls.

Spike and Bridget make me proud.  They are well-behaved guests.  (I tied their leashes to the picnic table leg.)  One of the hostesses feeds them pieces of country-fried steak, so it’s a great evening for all of us!

I never unhitched during our stay here.

The crew and I are walking in clover!

There wasn’t any reason as this is an isolated area.

Breaking camp will be easy tomorrow.   We’ll get an early start.