Do you suffer from PDS?

I’ve got it bad.  I presently have about eighteen uncompleted projects.

The first stage is the Good Intentions Stage.  The afflicted person displays great imagination and enthusiasm.  This is quickly followed by the Manic Stage, evidenced by a determined rush to Home Depot and back again.  Then invariably comes the Dormant Stage.  The duration of this stage has been reported to be as long as several years.  Next comes the Active Stage, otherwise known as the Git-er-Done Stage, when the initial intent becomes reality at last.  The final stage of PDS is the Jubilation Stage, recognizable by exclamations of “Wow!  I did it!” or “Why the heck didn’t I get this done sooner?”

Mostly I’m in the Dormant Stage.

However, today I did make it to the Jubilation Stage.  About four or five months ago I repainted the bathroom a beautiful, rich gold color.  When I got to the tub “surround,” I noticed the caulking needed to be replaced so I didn’t paint above that area.  Instead, I rushed off to Home Depot (sound familiar?) and bought the caulk and . . . . Little did I know, I was about to transition from Manic to Dormant!  Well, this morning I finished the job and it looks great!   Now why the heck didn’t I get this done sooner?  Every time I sat down in that room I looked at that unpainted section.  Geez.

Once I get my Casita — No More Procrastinating!

I think Tioga George or somebody wrote about using a maintenance reminder program on their computer.  I’ll have to look into that.  Um.  Later.

Let me tell you about a thieving bird.

Can you stand any more?  Am I going on too long?  Oh well, you gotta hear this.

Some time ago I mentioned on this blog the crippling winter we Georgians experienced this year.  Below freezing temperatures, snow, ice, power outages, school closings . . . It was terrible.  It lasted about three days.  Then Spring came and went in about 45 minutes.  Anyway.  About the bird.

During the terrible winter of 2011 I felt sorry for the birds.  I got some bird feed and scattered it on the snow.  Soon I had a delightful, mixed flock enjoying the buffet:  cardinals, blue jays, doves, sparrows, etc. When the seed ran out, I didn’t get any more.  By then everything’s green and, heck, my garden is LOADED with weed seeds.

That’s when things get weird.

I wake up one morning to the sound of a bird singing . . . no . . . yelling!  I snap wide awake and realize the bird is in the house and it’s mad and it’s darn well letting me know it’s mad.  There is no mistaking — I’m being scolded quite royally.

Spike and I jump up and run out to the living room.  He’s gone.

I have since figured out that this bird was giving me a piece of its mind over the termination of the seed buffet.  See, early that morning I had opened the back door for somebody’s bathroom break and left it open so I wouldn’t have to get up two more times before dawn.  (We don’t believe in simultaneous elimination at this house.)  In fact, I usually keep the back door open during the day.  Otherwise I’m door-lady all day.

The bird doesn’t get any results from me, so he starts coming into the house and stealing kibble from Janie and the crew’s dish.  And he isn’t the least bit sneaky about it!  He sings up a storm.  I think the little thief is taunting me. What gets me is this:  He always waits until I’m settled in the bedroom at the end of the house before he comes in.  That way, by the time Janie, the crew, and I run to the kitchen, he’s gone!  In fact, I’ve never even seen him! This has been going on for months.  I hate to think what he might do if I hid the food dish.  Peck my eyes out?

I should be working on project number seventeen . . . 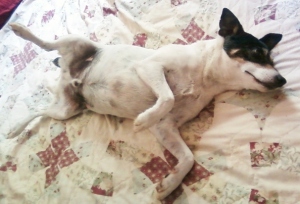 Spike demonstrates another way to stay cool on a hot day.

I see Janie and the crew are doing their driftwood imitation.

Fulltime nomad
View all posts by rvsueandcrew →
This entry was posted in Stories and tagged birds, procrastination, stories, summer, weird. Bookmark the permalink.

5 Responses to Do you suffer from PDS?